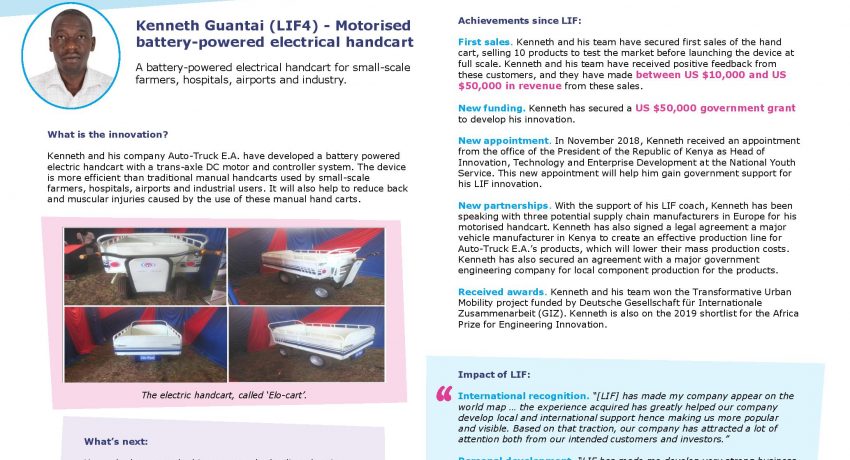 What is the innovation?

Kenneth (a UoN Alumni) and his company Auto-Truck E.A. have developed a battery-powered electric handcart with a trans-axle DC motor and controller system. The device is more efficient than traditional manual handcarts used by small-scale farmers, hospitals, airports, and industrial users. It will also help to reduce back and muscular injuries caused by the use of these manual hand carts.

New funding. Kenneth has secured a US $50,000 government grant to develop his innovation.

New appointment. In November 2018, Kenneth received an appointment from the office of the President of the Republic of Kenya as Head of Innovation, Technology and Enterprise Development at the National Youth Service. This new appointment will help him gain government support for his LIF innovation.

New partnerships. With the support of his LIF coach, Kenneth has been speaking with three potential supply chain manufacturers in Europe for his motorized handcart. Kenneth has also signed a legal agreement a major vehicle manufacturer in Kenya to create an effective production line for Auto-Truck E.A.’s products, which will lower their mass production costs. Kenneth has also secured an agreement with a major government engineering company for local component production for the products.

“International recognition. “[LIF] has made my company appear on the world map … the experience acquired has greatly helped our company develop local and international support hence making us more popular and visible. Based on that traction, our company has attracted a lot of attention both from our intended customers and investors.”

Personal development. “LIF has made me develop very strong business skills that I believe will be the key to drive my company to prosper … [LIF] also built my confidence enough to initiate high ranking partnerships with established companies like KVM. It also allowed me to convince high ranking government officials for favorable business policies with a successful debate in Parliament where my products were earmarked for tax waiver and issuance of an assemblers certificate.” 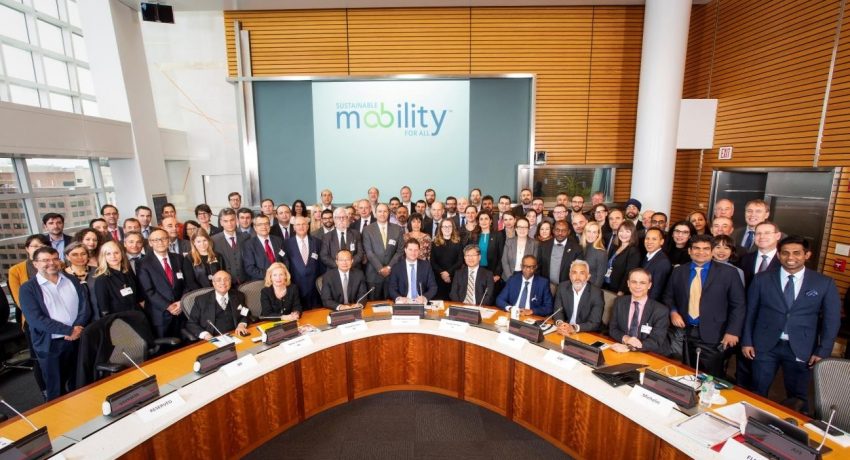 Having graduated from the University of Nairobi (UoN) in December 2017, I was recommended by the School of Economics as a candidate for the World Bank internship that is a part of the partnership between UoN and the World Bank that aims to build capacity for young African graduates with an aim of promoting sustainable development and poverty reduction in African countries.

After a rigorous selection process, I was selected to come to Washington DC, USA in September 2018 as a research consultant for the World Bank’s Global Transport Practice to work with the Sustainable Mobility for All (SuM4All) initiative. Hosted by the World Bank, SuM4All is a global partnership platform of over 50 leading actors in the transport and mobility space with a shared vision to transform the future of mobility across all modes of transport.

My experience so far has been revolutionary. I have been able to look at transport through a different lens that made me realize the inadequacies of the global mobility system in terms of universal access, efficiency, safety and environmental footprint across all modes of transport. Much of my work is channeled towards research and advocating mobility solutions for the said inadequacies of the system- with a focus on Africa.

Some of the publications that I have contributed to thus far are: this article on how three countries have adopted three different approaches to achieving green mobility, this review of international agreements, conventions and other instruments to achieve sustainable mobility and the soon-to-be launched Global Roadmap of Action toward sustainable mobility (GRA).